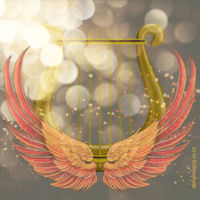 Archangel Jophiel is the Archangel of the Second Ray. The Second Ray is the yellow ray of wisdom, lightness of being, and joy.

It is quite daunting to write about an Archangel. I pushed everything I knew about him out of my mind and sat in meditation. In my hand, I held his crystal portal; he made this himself in the Ascended Masters’ vast portal. When holding his personal crystal portal, I knew I was connecting to the true Archangel and not a pretender. I was open to receiving from him alone.

As I sat quietly with his crystal portal, Archangel Jophiel appeared before me. He explained to me he was talking to me from the angelic realm, a bit like a skype session. We start with his description. He presented as tall, with golden blonde hair and dark brown eyes. His wings are golden brown on top and a soft white underneath. He was wearing sandals and a knee length white toga that was shorter in the front than the back.

He carried a Lyre. He says music is joy. Joy is a major component of the Second Ray. Music lifts the spirits, changes mood, and can generally lighten the being. Music and singing are Second Ray activities.

Archangel Jophiel's aura is a single colour. It is a mid-yellow.

His energy is gentle. There is an openness and friendliness to his energy that makes me smile. I feel welcome and comfortable in his energy.

It is hard for an angel to ascend in light, as everything is so perfect. So they stand with humanity, watching, caring, helping, and supporting. The Second Ray angels seek to bring joy where there is none, a connection to God when there is none, and understanding. They serve humanity.

Earth is an angelic planet. We are supported by the angels and archangels of all the rays. The angels don't walk with everyone, but they are present when and where they are needed. In Auckland (here in New Zealand), there is always a host of angels over the Bombay Hills. They sing their energy to the city. Every time we pass by, the host is different, the ray is different, and the shade or hue of the colour is different. It is a blessing to have them help the city in this way.