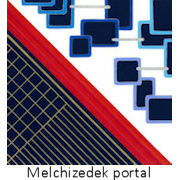 Melchizedek is best known as the High Priest of the Melchizedek priesthood.

Melchizedek is a First Ray Ascended Master. The First Ray is the blue, red and silver ray of Gods Will and Power (though the Melchizedek priesthood is a 7th ray order). Master Melchizedek has taken it upon himself to be a teacher for all who were previously initiated into the Melchizedek order. His service to the order keeps him close to this dimension. As Mother Mary embodies the Mother energy, Melchizedek embodies the complementary Father energy. He helps to smooth off the harsh edges that comes with those still in body and he focuses them away from the lower-self/ego/freewill towards the higher aspirations of God's will and the Higher Self.

When I first started to paint with Master Melchizedek to create his portal painting (see above left), he came to me as a young man with long, white hair. As the creation of the portal painting progressed, he aged until he was a decrepit old man at the end. Each layer of the painting is a representation of the Being he is.

If he were to appear before you in meditation, he often appears as an old man with flowing, thin, white hair and a beard. He wears white or dark blue.  Heis very serious.

His symbol is the Maltese cross. The cross represents the four planes of matter and the mastery over all of them. Like all Ascended Masters, he has mastered the planes of matter and now teaches this mastery to his chelas. We need to master these planes in the higher initiations.

Ascended Master Melchizedek is working at this time with Arcturus, Elohim of the 7th ray. 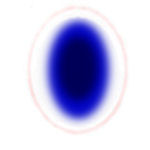 Ascended Master Melchizedek has an interesting aura (see right) of a dark blue centre leading to a mid-blue and then white with a fine red rim.

His portal painting as shown above is available as a portal card or portal print.

His energy flows from the print 24/7. It is wonderful to have him sending his energy into a room 24/7 via the print. You may also place the card on a chakra and receive the Master’s energy directly into the chakras.