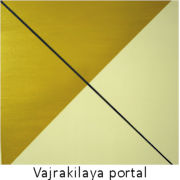 Vajrakilaya is a Buddhist deity. He is here to help with the removal of obstacles within us, which impede our own ascension. Vajra means “diamond’. The diamond body is for one who has attained liberation from form.

Vajrakilaya translates as ‘Diamond dagger’ – the one who cuts through obstacles to ascension.

Vajrakilaya's aura pulses a dark red at the centre, lightening to an orange edge.

He is working with the Ascended Master Sanat Kumara. To ascend into our own Christ we must become master over all our bodies, including the physical and etheric.