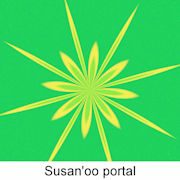 Susan'oo is the Japanese god of the storm. He is the brother of Amaterasu, Japanese goddess of the Sun. Susan'oo is a fifth ray Ascended Master. He works in the areas of knowledge and healing. His assistance is on a more practical level, working closely with those who themselves seek to help humanity, such as teachers, healers, inventors, and innovators. He works with all of those who are seriously confronting their own self truth and their own inner storm. If you are wondering what Susan'oo looks like, he has almond shape eyes and winged eyebrows-a feature in themselves. He looks like he is from another planet; his eyes don't quite fit into our parameters. But then many of the ancient gods of mythology were believed to be from elsewhere. His aura is a translucent green leading out to a white opaque sparkling border. He is one of the Masters who made the Green Ascension flame, third in the series, available on this site.